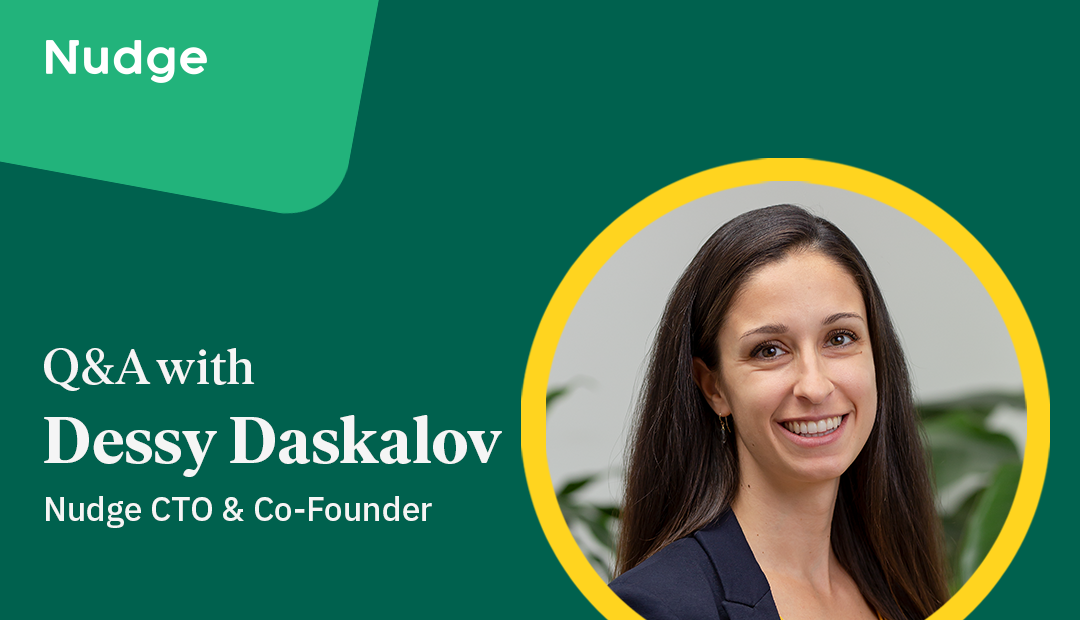 To celebrate International Women in Engineering Day, we sat down with our own CTO and co-founder, Dessy Daskalov, to talk about her journey in engineering, building diverse teams, and much more.

What led you to a career in engineering?

Dessy: I was born in Bulgaria and moved here when I was seven. My parents were very excited to move to a country with lots of opportunities for me and my brother. And early on, my dad was really excited about the very early tech entrepreneurs, like the Larry Pages and Sergey Brins of the world. He was always talking to us about, “Hey, these two people changed the world with computers. It doesn’t take a lot – it doesn’t take a lot of family wealth and degrees. That stuff helps, but you can do it as one person with willpower and hard work. You can do it.”

He wasn’t necessarily telling us to do it, but he was always telling us these stories. And I think early on both of us bought into it quite a lot. So I always knew from those early days that I wanted to be an entrepreneur. I was always math- and engineering-oriented and I ended up doing engineering in school thinking that it would help me develop the skills to eventually grow a company.

What was it like entering the world of engineering as a woman?

When I was in school, there weren’t many women. Queens actually had more women than most schools, but still we were around 13% of the engineering class. I knew that going in, and it stuck with me, OK -– this is better and we’ll just keep making it better. I think in school, as long as you have a few people in your camp, it matters less whether you make up 50% of the room or not. In school, people are on more even ground. You’re all moving together in the same direction, and that equalizes it a bit. Whereas in the business world, people are starting out at different places. Some are more advanced in their career, some are less advanced, there are more discrepancies.

So, I’d say I was aware of the fact that I was entering a world with a lot of men, but I wouldn’t say it posed challenges in school. Going into the workplace was another ball game. My first job was at a mining company and it was every stereotype you can imagine of a female coming into a very male-dominated space. None of it was ill-intentioned – it was the culture they were in and had been in their entire lives.

I later started at Eloqua, where there were 300 or 400 employees. It was really great for me, because I learned what it was like to build a small piece of something very large and growing. Eloqua was very influential in the marketing world, and a fantastic startup success story in Toronto. At Eloqua, I found that while there were some challenges being a female in a predominantly male space, there were also advantages. Amongst 30+ developers there were very few women. That can be looked at as an advantage in some ways. You stand out a little bit more.

What led you to co-found Nudge?

After a few years at Eloqua I decided, OK – I’ve learned what it’s like to be a small part of this bigger thing. Now I want to build software from the ground up. So I went to TWG. I was their ninth hire at the time, building software from the ground up for everyone from large companies to entrepreneurs looking to build out an MVP. I did that for a year and then told them that I was ready to do my own thing. I said, “I’m going to be an entrepreneur. I’ve always wanted to do this, and I’m just going to do it.” And they said, “Do you know what you’re going to do?” And I said, “Nope – but I’ll figure it out.” They told me they’d just met a woman named Lindsey and she had an idea for a product. She had customers lined up and was looking for a technical co-founder.

So Lindsey and I met up a few times, had some beers, and talked about the future of everything from environmental sustainability (because that was the focus of the product early on) to what it means to grow a software company. It’s funny to think back on those days. We hit it off from the start and partnered to build the software that would become Nudge.

Can you speak to the role of diversity in an effective engineering team?

In any industry where there’s a particular demographic that controls the industry – they’re generally going to tend to build for that demographic, whether it’s intentionally or unintentionally. So bringing different backgrounds, voices, and approaches to a team is important. Women and men see and experience the world differently. People of different racial backgrounds do as well. For us, if we think about our audience being frontline employees, there’s going to be a really diverse group of people using our app. If we don’t have that diversity reflected in our team, there’s fear that we’re not serving up the ideal experience for all of our users. But I think it’s much more important to have a diverse company as a whole. You want every team to be diverse, but you want a diverse company as a whole because those things can be caught in other ways as well.

But building those diverse teams can still be difficult.

It’s tough, from a population of candidates standpoint. It’s a pipeline issue. You haven’t had enough women in the pipeline for decades, and then it takes 10-20 years to build that pipeline because you need women to go through school and graduate. So that’s definitely an issue.

There’s also some programs now that act as really good accelerators for women. There are coding camps that are helping bring more people in faster. It still takes years to develop the expertise to become a senior level engineer, so we still need to wait for that to happen for hiring. Personally, I’m looking forward to having a slightly bigger team at Nudge so that we can bring in junior engineers and give them the attention and the effort they need to become stellar female senior engineers. That’s what we should all be doing.

Thanks to Dessy for sharing her story with us today! (Psst…we’re always looking for talented women to join our tech team! Check out our open roles here.)